This story appears in the March 2013 issue of Startups. Subscribe »

At Crazy Aaron's Puttyworld, make no mistake: Mike Crawford is the boss. With Down syndrome and obsessive-compulsive disorder, he's a perfect fit for a position in quality control. "He tells everyone what to do," says company owner Aaron Muderick. "If a sticker is not straight or that cover is not on tight, he's going to pull it off the line and let you know."

While Crawford's challenges may set him apart in daily life, he is hardly alone at Crazy Aaron's. The Narberth, Penn.-based maker of Thinking Putty, a stress-relieving toy marketed to office workers, employs more than 500 mentally and physically challenged people across six Philadelphia-area vocational centers.

Muderick first got the idea to hire what he terms "differently abled" workers in high school while on a summer job in a pet-tag factory, where he noticed two kinds of people: able-bodied workers who spent their lunch hour looking for new gigs, and mentally challenged staffers who enjoyed their work. "The special-needs individuals were the ones that showed up on Monday morning with a smile," he says.

Muderick and his wife launched Crazy Aaron's in 1999. In 2002 they expanded with new products and signed on with Lynch Homes, a nearby dependent-care facility that offers vocational services to its residents.

The ability level among Lynch Homes residents varies widely, from those with physical restrictions to those with limited vocabulary skills. At Crazy Aaron's, Muderick has designed an environment where higher-functioning employees work alongside their less-abled counterparts, making sure everyone has the opportunity to contribute. For example, a woman named Shirley, who has use of only one arm, is seated between one co-worker who places putty in a can and another who screws on the lid. "She participates to the level of her ability," Muderick says. 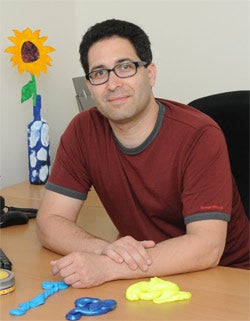 "The job has impacted their lives so much, helping with their motor skills, and it's therapeutic for them," says Aruna Conteh, assistant production manager at Lynch Homes. "It boosts their morale and their sense of independence." And, she says, since the facility's residents do not pay for their own housing or care, their paychecks go toward things they enjoy, like a night at the movies or shopping for clothes.

While the story is inspiring, the bottom-line results have been astounding. In 2002, with a staff of six workers and a supervisor, Crazy Aaron's had a production yield of 200 units per batch. Today the yield is in the thousands, and the company's products are available in 25 countries.

Yes, even better margins could be achieved by outsourcing manufacturing to Asia, but Muderick prefers to keep things the way they are. "You need patience to work with people who have special needs, but they will get it right, because they have a certain dedication," Muderick says. "And that makes all the difference."